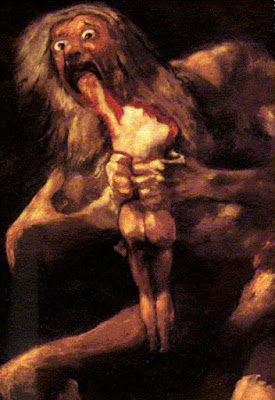 Shortly after I began this blog the Global Financial Crisis (GFC) dramatically changed and narrowed my focus. My early posts were about the incipient shifts in geopolitics that were surfacing in the superficially unipolar world the collapse of the Soviet system had bequeathed us. Systems as expressed in geopolitics and the tectonics of socio-political infrastructures had always been my framework for trying to sort out world events, but the GFC underscored the power of a particular system. It may be the deepest extant system and is itself coterminous with civilization: it is money. I've devoted a series of posts to what money is and a few more to how it works. And I've quoted Mayer Amschel Bauer Rothschild, whether apocryphally or not I don't really care: "permit me to issue and control the money of a nation, and I care not who makes its laws" because it captures the megalomania of those charmed by the devils legerdemain with the invisible, insidious, enervating and up to the point of physical violence, omnipotent power of money.

These posts again and again I fear have failed to impress people with the dangerousness of money power to anywhere near the degree they should distrust it. The weaponization of finance as deployed by the US in the "Global War On Terror" (GWOT), first against the failing states where Al Qaeda festered, then against Iran and Venezuela and now against Russia, has evolved since 2001 into a bold and entirely unselfconscious financial imperialism that struts and pontificates a hollow morality in the absence of similarly lethal opposing alternatives, alternatives it systematically undermines wherever it divines their bloom. Is it any wonder the Pope himself has weighed in against it? While the Bretton Woods system which underpinned the prosperity both here  and abroad in the years 1946 to 1971 was subtlety transformed with Nixons shift to fiat money, the politics of the system retained it's New Deal ethos until the Supreme Court threw the 2000 election and Imperialism finally came home to roost. The decomposing residue of prestige earned with the post war global roll out of the New Deal, an effort sustained mostly in resistance to the totalitarian perversion Stalin imposed on juvenile communism in Russia, is now sloughing off, revealing the reptile skin of the anti-humanist leviathan Western Capitalism has become.

Without the Soviet sustenance of its better angles this system has proven incapable of containing the psychotic avarice of those who lust for power through money. Let's take this moment to build a new mythology from the tragedy Greece has become. Through this clear manifestation of the money psychosis, where the lethal power of money is on full display, let the liquidated cradle of democracy stand as a parable on the evils of money power: the democratically elected government of a supposedly sovereign European nation, which nation first practiced representative government, has been publicly, deliberately and humiliatingly enslaved by a claque of unelected bankers subject to an assortment of socio-pathologies that assuage their consciences for what may turn out to be genocidal acts: at a minimum they are political acts, which to achieve results, casually threaten a Greek genocide. This is precisely the banal evil of which Hanna Arendt warned: collective rectitude in adherence to an ideology physically and temporally removed from its deadly consequences leaving those consequences conveniently and willfully ignored.

By denying liquidity to a modern industrial society, these bankers have threatened that population with extermination by starvation and in so