The Marginal Propensity to Hoard

Dick Cheney said "deficits don't matter", and for his purposes that was true.   Speaking as he was of the budget deficits of the United States, monopoly issuer of a floating fiat currency, he was correct if he meant these deficits could never threaten the solvency of the US government. For Cheney this meant it was OK to spend prodigious sums that would go mostly to management bonuses and salaries at companies contracting to fight America's wars for it, companies with which he was deeply affiliated.  Cheney meant that since the deficit could not make the US insolvent, there was no problem with it making him and his friends rich.


On a floating fiat currency, so long as the issuer of the currency, in our case the US government, denominates its debts solely in that currency, as ours does, it can never be made insolvent by those debts.  This is a simple fact of fiat currencies, money is created whenever the government spends and extinguished whenever it collects taxes.  While this does not mean that deficits are unimportant, it certainly means they do not threaten the solvency of the government.  Deficits are an outcome of an hysteresis in economics that results from the inextricability of human nature from the object of the discipline.

The first great drama of New York City skyline was the rise of the piers for the Brooklyn Bridge. Born in the ashes of America's great internecine conflagration, alignments forged in war between commerce and politics, between laborers and visionaries and between capital and human creativity were set loose in the sprawling and expanding city. Grand projects of a scale and ambition never before conceived in the New World were dreamed of and then made real. Imagined half way between the dawn of industrialization and the present, the Brooklyn Bridge, and particularly it's piers, can be read as both ancient and contemporary. They stand at the dawn of American Empire and are the harbinger of full scale American industrialization towering over a vanishing pastoral to heights even steeples never dreamed of. 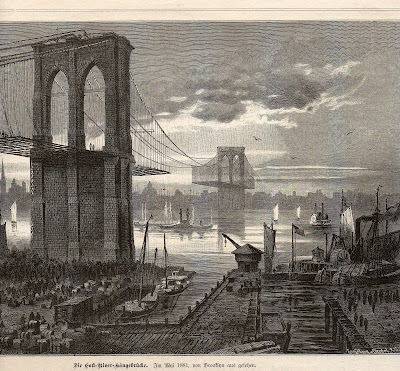 The gilded age, parallel to which the piers arose, was at its' end an era still deeply rooted in the ancient traditions of European civilization. Although the sinews of industrialization were insinuating themselves into every aspect of the new, between the Civil War and the First World War most of the advances in industrial technology were sublimated into infrastructure which unlike the Brooklyn Bridge remained invisible. While H. H. Richardson's buildings had been bearing wall masonry, Charles McKim's were mostly steel frames, parged with terracotta and only veneered with stone. Privy gave way to sewer, stairs to elevators and gas light gave way to electric.