The Glib Shit that is Bitcoin 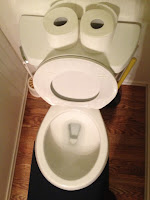 If money is the commodification of trust, where an exchange value is abstracted from the constellation of productive relationships that generate actual real world value, money is then reduced to a state sanctioned power relationship and depends on the benevolence of that state for its sustained value. Similarly, Bitcoin is the commodification of waste, the monetization of pure shit that depends on the sustained production of waste to hold its value. Nathaniel Popper's June 29th New York Times article makes this clear: "Mr. Ng, 36, said he had become an expert in finding cheap energy, often in places where a coal plant or hydroelectric dam was built to support some industrial project that never happened. The Bitcoin mining machines in his facilities use about 38 megawatts of electricity, he said, enough to power a small city."

"Enough to power a small city", electricity is being diverted from productive use in the real economy to power the "mining" of Bitcoins, Mr. Ng alone owns 28 such facilities. In a reductio ad absurdum of financialization, the libertarian fantasy of commodity money independent of the state has layered an encryption dependent universally transparent accounting system, Bitcoin's blockchain, over the armature of globalized financial flows to support international gambling with pure waste energy: "Mr. Lee said the Chinese took quickly to Bitcoin for several reasons. For one thing, the Chinese government had strictly limited other potential investment avenues, giving citizens a hunger for new assets. Also, Mr. Lee said, the Chinese loved the volatile price of Bitcoin, which gave the fledgling currency network the feeling of online gambling, a very popular activity in China. There has been widespread speculation that Chinese people have used Bitcoin to get money out of the country and evade capital controls, but Mr. Lee and other experts said the evidence suggests this is not a significant phenomenon."

Like casino owners, the Chinese "investors" in this financially extractive and environmentally destructive mass psychosis are interested primarily in preserving or enhancing the cash flows they receive off the pure, unfettered waste of electricity and environmental destruction that underwrite Bitcoin: Bitcoin converts ecological shit into money.

While western, libertarian rubes try to persuade them of the "moral purpose", "some Bitcoin advocates have complained that the Chinese companies have been motivated only by short-term profit, rather than the long-term success and ideals of the project," Chinese investors couldn't care less about western fantasies of ideal power relationships and the liberation of the individual to exploit the animate and inanimate world for personal gain: the Chinese Communist Party has already established a system fully supportive of individual expropriations through such exploitation, so long as it stays clear of politics. Investors in China, just like here, have proven happy to content themselves to personal material spoils.

In fact, the Chinese are fairly contemptuous of the westerners and their proposals seeing them as naive, entitled and oblivious, "Bobby Lee, chief executive of the Bitcoin company BTCC, which is based in Shanghai, bristled at that — and at the notion that the Chinese companies represent any sort of united front. He attended the April meeting and pointed out that the Chinese companies had disagreed among themselves on how urgent it was to make changes to the Bitcoin software. He said the American companies failed to understand the power dynamics in the room that day. “It was almost like imperialistic Westerners coming to China and telling us what to do,” Mr. Lee said in an interview last week. “There has been a history on this. The Chinese people have long memories.”

I have to say, on this I'm much more sympathetic to the Chinese than to the westerners: the Chinese are clear about what they are up to and haven't confused themselves with some "objectivist" bullshit ideology that blinds them to the price the future pays for their present prosperity: Chinese "miners" may be callous, but they're not delusional shit heads.
Posted by jsn at 2:18 PM No comments: